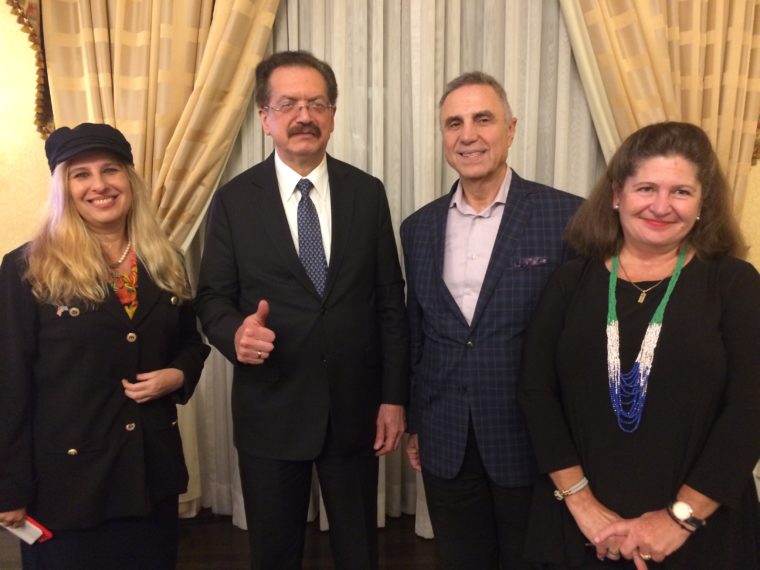 NEW YORK – The East Mediterranean Business and Culture Alliance (EMBCA) began its latest season of events with Burnt Offerings and Whispering Voices: The Smyrna Catastrophe (September, 1922), a Historical Remembrance on September 26 at the 3 West Club in Manhattan.

The event included presentations by EMBCA’s President Lou Katsos on The Japanese Ship Tokei Maru- A Profile in Courage and Humanity; Peter Stavrianidis, PhD, educator and community leader in Hellenic Genocide Issues on Smyrna 1922: The End of Hellenism in Asia Minor; and Professor Ismini Lamb, the Director of the Modern Greek Program in the Department of Classics at Georgetown University on Correcting Three Popular Misconceptions about the 1922 Catastrophe in Smyrna. U.S. Representatives and Co-Chairs of the Hellenic Caucus Carolyn Maloney (D-NY) and Gus Bilirakis (R-FL) sent a letter in support of the EMBCA event on the Smyrna Catastrophe which was read at the event by Taylor Abbruzzese, Caseworker and District Representative for Rep. Maloney.

Katsos welcomed all those present and gave a brief introduction, noting that “the Smyrna Catastrophe refers to the deliberately set fire four days after Turkish forces entered and captured the port city of cosmopolitan Smyrna in Asia Minor and which completely destroyed its Hellenic and Armenian quarters. Its Muslim quarters escaped damage. The fire was started September 13 and extinguished September 22 in 1922.

“Turkish troops per eyewitnesses systematically cordoned off the Quay to contain the Hellenes and Armenians within their fire zone quarters and prevented them from fleeing. The estimated Hellenic and Armenian deaths resulting from the fire range up to 100,000 and approximately up to 400,000 as Hellenic and Armenian refugees in the city from other parts of Asia Minor tried to escape the Turkish troops and irregulars cramming its waterfront and quays to escape from the horrific flames. 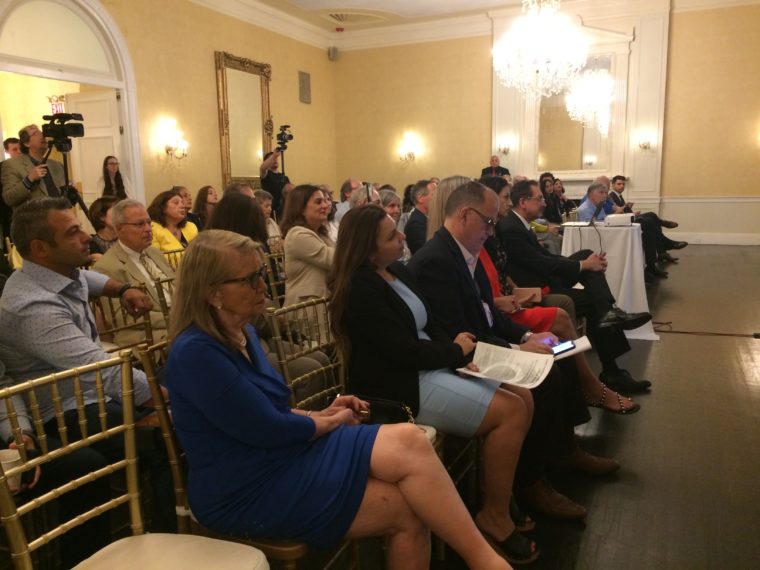 The EMBCA event on the Smyrna Catastrophe was held at the 3 West Club in Manhattan. Photo by Eleni Sakellis

“Eyewitness reports describe panic-stricken refugees diving into the water to escape the flames and that their terrified screaming could be heard miles away. They were forced to remain there under harsh conditions and were periodically robbed for two weeks and after having had massacres and atrocities committed against them before the outbreak of the fire. Women were raped and tens of thousands of Hellenic and Armenian men were subsequently deported into the interior of Anatolia, where many died in harsh and brutal conditions. After the Smyrna Catastrophe the Hellenic city founded 3,000 years before, a jewel of the Eastern Mediterranean, ceased to have Hellenic residents.”

Katsos spoke about being inspired to do an event on the Smyrna Catastrophe by Lamb’s presentation at an EMBCA event last year honoring Greek-Irish author and foremost Japanese scholar Lafcadio Hearn, known in Japan as Koizumi Yakumo. That event held in the presence of Ambassador Dionyssios Kalamvrezos- Deputy Permanent Representative of Greece to the United Nations, and the Deputy Consul General of Japan in New York Masaru Sato, led Katsos to his presentation on the Japanese ship Tokei Maru which saved 822 Armenians and Greeks from Smyrna and brought them to Piraeus. 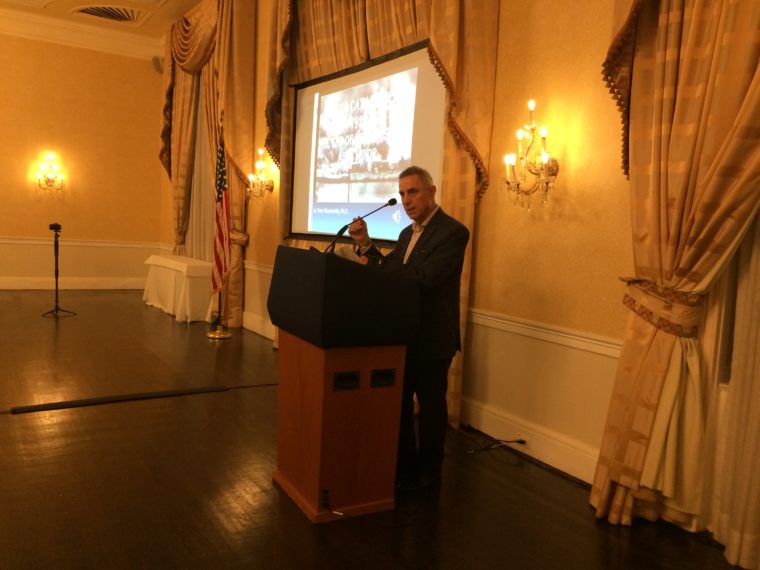 Katsos just recently returned from Japan where a monument to Hearn was unveiled and where he spoke with Professor Nanako Murata of Toyo University, the leading scholar on the Tokei Maru, about the ship and the courageous act of its captain and crew. Prof. Murata, who speaks and reads Greek, traveled from Japan to Greece and found evidence in the Greek newspaper archives confirming the truth about the Tokei Maru which until recently was considered merely a legend told by survivors of the Catastrophe.

Stavrianidis spoke movingly about Smyrna and the Hellenes of Asia Minor, noting his family roots in Pontus and the political climate of the time which led to the Catastrophe. He highlighted the role that alliances played in the decision to allow Greece to administer the areas of Asia Minor delineated in the Treaty of Sevres (1920) pointing out that the Allies did not want to do it themselves, nor did they want Greece to do it but because they most definitely did not want Italy there, they opted for Greece. The rise of nationalism in Turkey and the idea of Turkey for Turks only also proved devastating to the minorities of Asia Minor. Key figures were also discussed including Eleftherios Venizelos, Ion Dragoumis, Ioannis Metaxas, Dimitrios Gounaris, and Aristeidis Stergiadis, the Greek high commissioner, or governor-general, of Smyrna from 1919 to 1922. Stavrianidis also questioned the Trial of the Six which culminated in the death sentence and execution of six of the nine defendants. He concluded his presentation by pointing out that the Smyrna Catastrophe marked the end of Venizelos’ Megali Idea.

Prof. Lamb’s presentation focused on the three main points: The Greek occupation of Smyrna was NOT an act of aggression that gave rise to the Turkish Nationalist movement and led to the persecution of Christians; That subsequent Greek and Turkish atrocities were NOT AT ALL equivalent in scope, intensity or intent; And that anyone making these points is NOT automatically an “anti-Turkish bigot.” 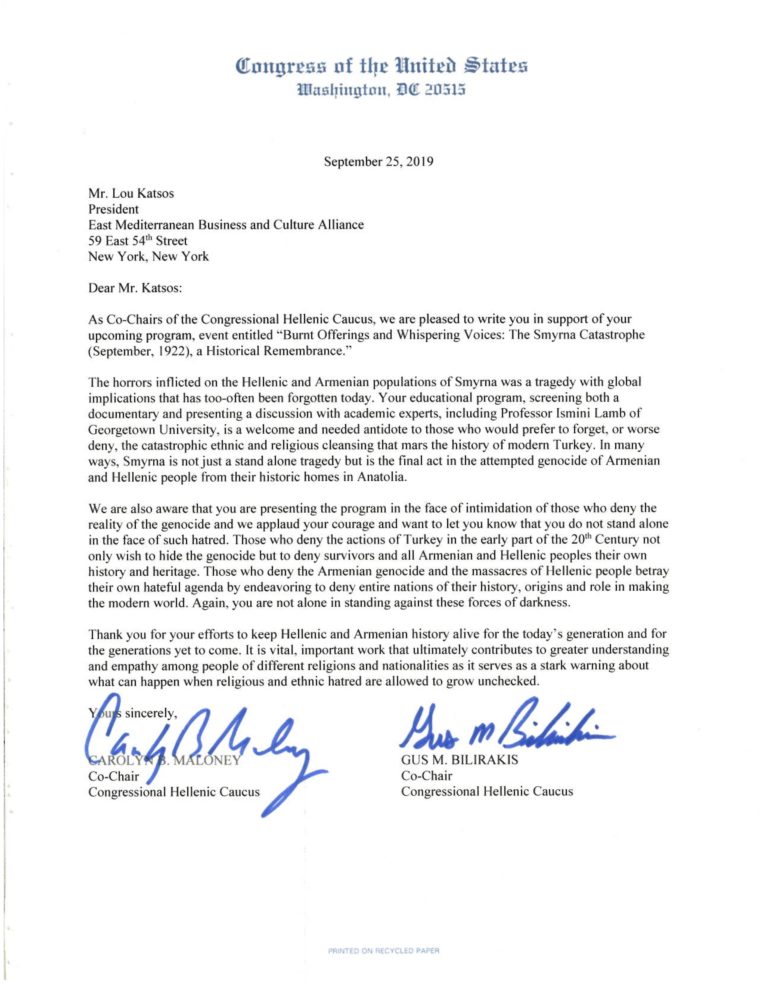 U.S. Representative and Co-Chairs of the Hellenic Caucus Carolyn Maloney (D-NY) and Gus Bilirakis (R-FL) sent a letter in support of the EMBCA event on the Smyrna Catastrophe which was read by Taylor Abbruzzese, Caseworker and District Representative for Rep. Maloney. Photo: Courtesy of EMBCA

Prof. Lamb is currently working on the biography of George Horton, the noted American philhellene, classicist, author, diplomat, ethnographer, and humanitarian activist perhaps best known in the Greek community for saving innumerable lives in Asia Minor and especially from the Smyrna Catastrophe. The Blight of Asia, his 1926 book detailed Turkey’s atrocities against its non-Muslim minorities leading up to and including the Smyrna Catastrophe. Lamb noted that in her extensive research, she has found that Horton was very sympathetic to Turkey and saw that its diversity along with more tolerance would have greatly benefitted the modern nation which instead followed the destructive path of nationalism and a policy of Turkey for Turks only. She also noted the need for acknowledging the historical facts of the Genocide and also for forgiveness which will help all moved forward towards a better future.

Lamb said, “George Horton lived through the genocide he described and was profoundly affected by it. As his biographer, I have to address that. But second, and more importantly, I have come to believe it is important to acknowledge genocide for another reason: healing. Victims need to forgive to free themselves from the chains of revenge. As Nazi victim, Corrie Ten Boom, has said: ‘To forgive is to set a prisoner free and discover the prisoner was you.’ It is also good for the perpetrators to be forgiven, insofar as this might encourage them to do better in the future.”

Steve Pitkin, a descendant of Horton, was among those present at the event, with his wife, showing support for Lamb and her work.

Your ticket for the: ARTICLE: “Burnt Offerings and Whispering Voices: The Smyrna Catastrophe, a Historical Remembrance” event on September 26, 2019