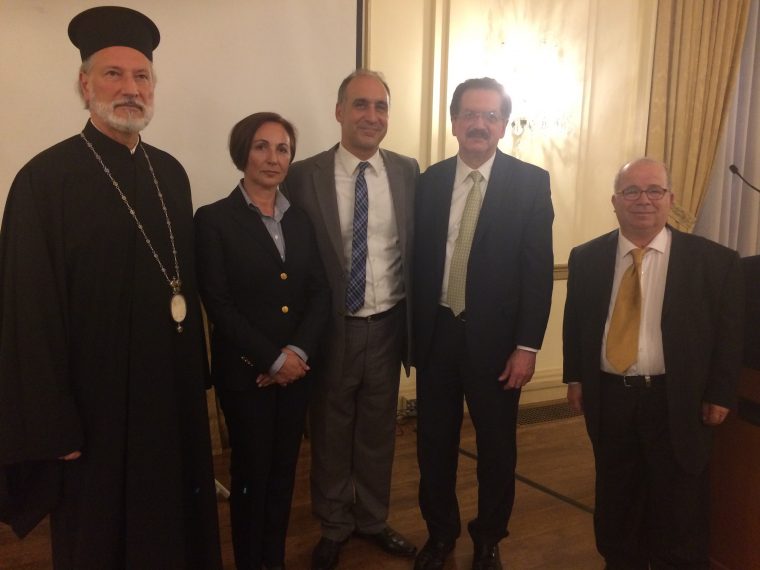 Left to right: Bishop of the Eastern America Archdiocese of the Serbian Orthodox Church His Grace the Right Reverend Irinej (Dobrijevic), Consul General of Serbia in New York Mirjana Zivkovic, Alexander Billinis, Lou Katsos, and Stamatis Ghikas all spoke at the EMBCA event in Manhattan. Photo by Eleni Sakellis

NEW YORK – For many in the Greek community, Rigas Feraios (Velestinlis) is probably best known as a proto-martyr in the Greek Revolution, though the details of his life and what he actually stood for may not be as well known. On June 13, the East Mediterranean Business and Culture Alliance (EMBCA) event, Romioi, the Balkans and the Rigas Feraios Charta on the 221st Anniversary of His Death, presented a fascinating look at Rigas and his life and times.

One of the Balkan’s most influential writers, political thinkers and revolutionary Enlightenment figures of the 18th Century, Rigas Feraios (Velestinlis) envisioned for the Romioi (he did not use the word Hellenes in his writings) or Rum Millet (Hellenes, Arvanites, Albanians, Bulgarians, Romanians, Serbs, Vlachs, etc.) to liberate themselves from the Ottomans and to form a nation starting South of the Danube (his “Charta”) and encompassing what is now the Balkans (in total) and the Hellenic Republic.

The event held in Association with AHEPA District 6 and Delphi Chapter #25 was the 5th Canoutas Lecture in the AHEPA Canoutas Lecture Series. The speakers included EMBCA Founder/President and AHEPA Governor of Empire State (New York) District 6 Lou Katsos on “Rigas Feraios’ Charta, and his Vision of a Pan Balkan Federation,” EMBCA 1st Vice President and Former Executive Director of the Hellenic American Chamber of Commerce Stamatis Ghikas on “The Arvanites- Elena Ghika (Dora d’Istria),” and author, Byzantine scholar, and lecturer at Clemson University Alexander Billinis on “The Balkans in Rigas’ Era: Common Themes in the Mosaic.” 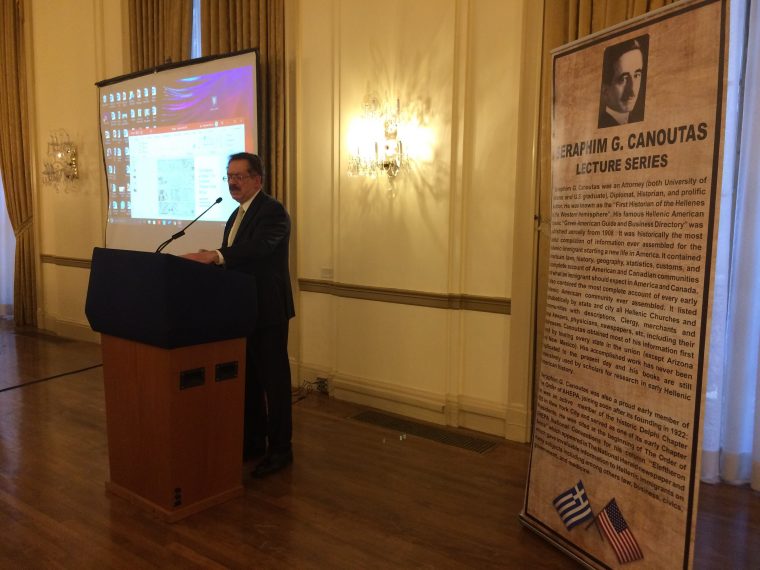 EMBCA President and recently elected AHEPA District 6 Governor Lou Katsos gave the welcoming remarks at the event as well as historical background for the presentation. Photo by Eleni Sakellis

Also among the speakers were the Consul General of Serbia in New York Mirjana Zivkovic and Bishop of the Eastern America Archdiocese of the Serbian Orthodox Church His Grace the Right Reverend Irinej (Dobrijevic) who thanked the organizers and all those in attendance for the presentation on Rigas who is also considered a hero in Serbia for his efforts to free the people from Ottoman oppression.

What emerged from the presentation was a historical figure whose vision for unifying the people of the Balkans combined the best of the ideals of freedom and the Enlightenment with Hellenic ideals of democracy without the divisiveness that nationalism eventually brought to the region. The struggle for freedom was not divided along religious lines either since everyone under the Ottoman Empire was oppressed.

Rigas is a remarkable figure, a Vlach by origin as Katsos noted. Rigas’ Charta, 12 maps of the area south of the Danube, highlighted his vision for a Pan-Balkan federation with a flag that featured three stripes, three crosses, and the club of Hercules. The first Greek newspaper, published in Vienna, was Ephimeris edited by Rigas for a time, Billinis noted, adding that Ephimeris still exists, published in Siatista, Greece. The Greek school in Vienna was also established in 1804, highlighting the longstanding presence of the diaspora community. Billinis also pointed out the many commonalities shared by the people of the Balkans linguistically, for example, as well as in the struggle for freedom from Ottoman oppression.

Rigas’ writings: Anthology of Physics (1790), Hellenic Republic (Vienna, 1797), School for Delicate Lovers (Vienna, 1790), New Map of Wallachia, General Map of Moldavia (Vienna, 1797), Thourios or Patriotic hymn (poem) (Vienna, 1797), New Political Constitution of the Inhabitants of Roumeli, Asia Minor, the Islands of the Aegean and the Principalities of Moldavia and Wallachia (Vienna, 1797), and New Anacharsis (Vienna, 1797) were written in Demotic Greek. The line from Thourios which Lord Byron translated as “Better one hour of free life than forty years of slavery and prison” became a rallying cry of the Revolution.

Rigas was betrayed by a fellow Hellene, arrested in Trieste, and then sent to the Ottoman governor in Belgrade where he was tortured and later strangled on June 24, 1798. Statues honoring Rigas Feraios stand at the entrance to the University of Athens and in Belgrade at the street that bears his name. 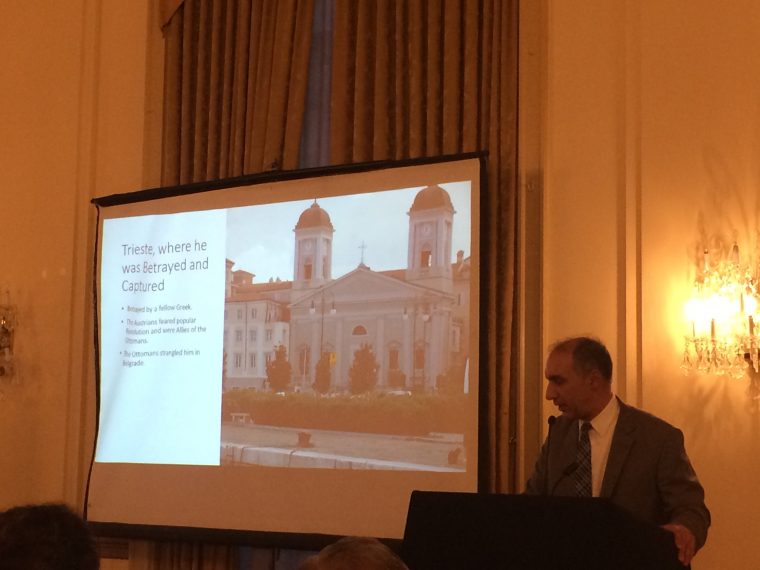 Your ticket for the: ARTICLE: EMBCA Event Commemorates Rigas Feraios 221 Years after His Death