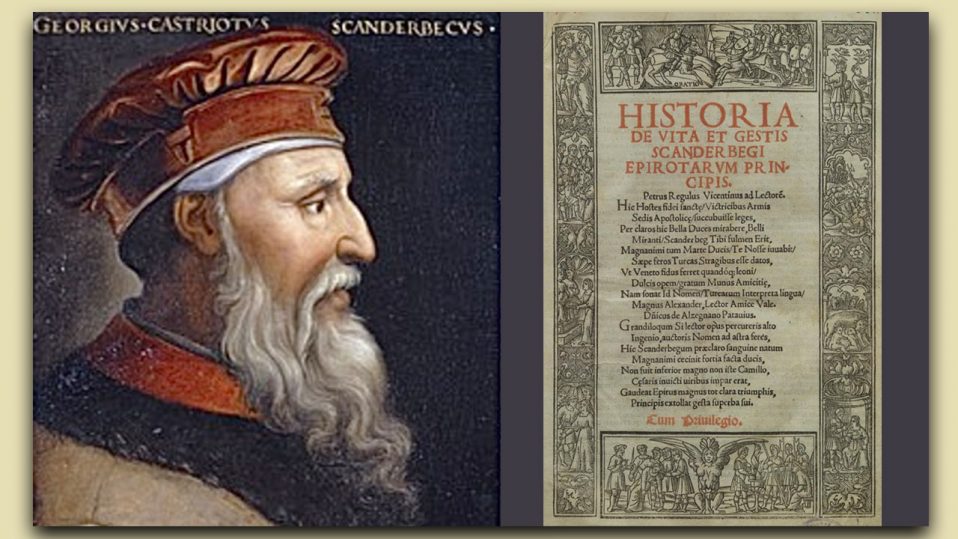 George Kastriotis , commonly known as Skanderbeg/ Lord Alexander (the name given to him by the Ottomans) is one of the true historically significant heroes of the Middle Ages in Europe as well as in the Balkans. It is amazing how little known he remains outside of Albania where he was born, and is its national hero. Born in 1405 he was member of the noble Kastrioti family, and the son of John and Voisava Kastrioti. As an Albanian feudal ruler his father (a major contributor to the Serbian Orthodox Monastery of Hilandar in Mount Athos ) governed the territory between the Cape of Rodon and Dibër and had at his disposal an army of 2,000 horsemen. When young George Kastrioti was sent as a hostage to the Ottoman court where he was educated and entered the service as a Janissary, and gained military fame, of the Ottoman sultan for the next twenty years. In 1443, during the Battle of Niš, he deserted the Ottomans and went back home to became the ruler of Krujë and the nearby areas extending from current central Albania to Sfetigrad, and Modrič. As a feudal lord and military commander he led a massive rebellion against the Ottoman Empire in what is today Albania, the Hellenic Republic, Kosovo, Montenegro, Serbia and North Macedonia. For 25 years, from 1443 to 1468, Skanderbeg's 10,000-man army marched through Ottoman territory in the Balkans, winning against consistently larger and better-supplied Ottoman forces. Undefeated while alive it can rightly be said he helped to save Western civilization from being overrun by the Ottomans and suffering the same fate as the Byzantine/Eastern Roman Empire. He ranks high in the military history of that time, his tactics studied at West Point, as the most persistent—and ever-victorious—opponent of the Ottoman Empire who presented a major obstacle to Ottoman expansion. Many in western Europe at the time considered him to be a model of Christian resistance against the Ottomans. Join us to discuss this amazing man and his times on the Anniversary of his passing, times quite different than our own of regional nationalism that in many ways blurs what we have in common in the Balkans. Although a military man George Kastrioti was in a sense conceptually and philosophically a precursor to the Romaic Rigas Ferraios who dreamed of a united Balkan state free of the Ottomans.

Your ticket for the: “Anniversary of George Kastriotis/ Skanderbeg (1405 – January 17, 1468) the Prince of Epirus” Panel Discussion