“Hellenic Revival Architecture in an Age of Revolution” Panel Discussion 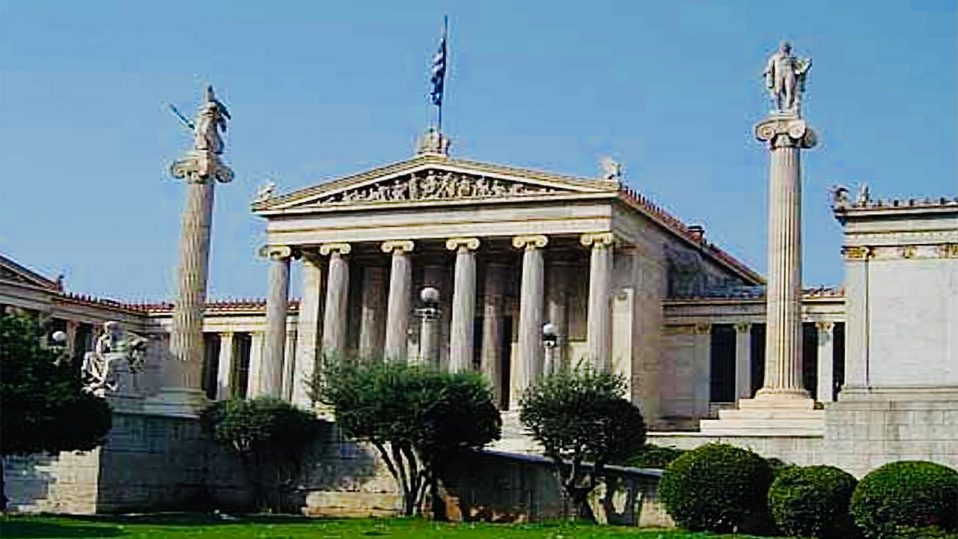 Join us for EMBCA's “Hellenic Revival Architecture in an Age of Revolution” Panel Discussion Webinar on Sunday, June 13 at 2 P.M. EST (11 A.M. PST, 9 P.M. Athens EEST). The panel for this unique event will be introduced and moderated by Lou Katsos, EMBCA's President/Founder and former Adjunct Professor of Architecture at the Chanin School of Architecture at Cooper Union. The distinguished panel will include Architect/ Lecturer/ Artist John Fotiadis, and Sarandis Zafiropoulos Emeritus Professor, Architecture and Urban Design, School of Architecture at the Aristotle University of Thessaloniki. During this panel discussion we will discuss what Hellenic revival architecture is , its history and characteristics and focus through examples on Hellenic revival architecture particularly in Hellas and America when it reached its peak popularity from 1825 to 1860.

Greek Revival is a style of architecture that was inspired by the classical Hellenic temples through their symmetry, elegance , and proportion . It is said British architect James “Athenian” Stuart was first to introduce Greek Revival to Britain when taken by the classical beauty of the architecture he discovered on a 1758 trip to Hellas. Documenting his discoveries he published his Antiquities of Athens in 1762, producing the world’s first reference book detailing Classical Hellenic architecture. It was however later when it became a full-blown trend in England and Europe in the 1820s and 30s and to a great degree due to the Hellenic War of Independence (1821-1832) . Access to the original Hellenic architectural masterpieces in Hellas only really became easier to view and study after the Hellenic War of Independence ended in 1832. Lord Byron's participation and death during the war bringing it‘s study additional prominence.

In Hellas following the War of Independence the romantic nationalism of the time encouraged and inspired the use of historically Hellenic architectural styles in place of Ottoman or pan-European ones. Classical architecture was used for secular public buildings as well as commercial ones and individual homes. Old Athens was filled with them and gave the city a special elegance. The style inspired also the building and architecture of modern Sparta in the 1830’s, and buildings and residences in many other cities and towns throughout Hellas. . Examples of Greek Revival architecture in Hellas among many others include the Old Royal Palace (now the home of the Parliament of Greece), the Academy and University of Athens, the Zappeion, and the National Library of the Hellenic Republic . The most prominent architects in this style included Europeans such as Christian and Theophil Hansen and Ernst Ziller and German-trained Hellenes such as Stamatios Kleanthis and Panagis Kalkos.

As previously stated and mentioned in our various panel discussions American Philhellenism by 1821 when the Hellenic Revolution broke out, although derived from European origins became more than just a philosophical intellectual movement. It caught America by storm and referred to as the Greek Fever/ Greek Fire historically in the U.S.. This storm , and per Percy Shelley’s famous poem Hellas declared in his preface “we are all Greeks, Our laws, our religion, our arts, have their roots in Greece...” also extended itself into architecture. Greek revival architecture was past of that storm in America. It was in America that Hellenic revival Architecture fully bloomed. It’s extensive use can be seen in Washington D.C. America’s Capitol, in New York , Philadelphia , North and South, and throughout the United States In major cities and small ones. Americans being part of a new democracy were inspired by its birthplace and for them defined them by its symbolism and meaning relating to their feelings towards classical Hellenic culture, art, philosophy, and Hellenism in general.

This event and others we have had, and are being planned are part of EMBCA’s American Hellenic Revolution of 1821 Bicentennial Committee series of events focusing not only on the Revolution but also importantly on the American, Diaspora and International aspects and influences of the Revolution for its 200 Year Anniversary.

Register for Event: “Hellenic Revival Architecture in an Age of Revolution” Panel Discussion

Your ticket for the: “Hellenic Revival Architecture in an Age of Revolution” Panel Discussion

“Hellenic Revival Architecture in an Age of Revolution” Panel Discussion