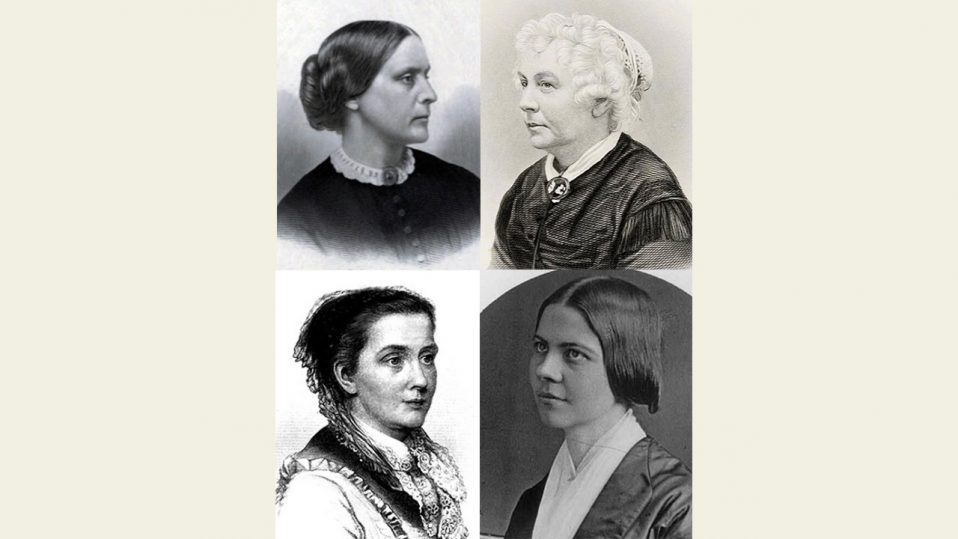 Join us for EMBCA's “The Hellenic Revolution and its Effects on the American Women’s Suffrage Movement” Panel Discussion Webinar on Sunday, May 23 at 2 P.M. EST (11 A.M. PST, 9 P.M. Athens EEST).

During the Woman’s Suffrage Centennial (1920-2021) and Hellenic Revolution BiCentennial, (1821-2021) East Mediterranean Business Culture Alliance (EMBCA) reflects, honors and celebrates our foremothers and women’s heroic achievements in freedom and democracy. We celebrate contributions of American Philhellenic women to the Hellenic Revolution and their courageous activism in the Women’s Suffrage/Women’s Rights Movement.

Our Guest of Honor is Congresswoman Carolyn B, Maloney, a great American Philhellenic woman whose celebrated leadership, earned her the nickname of “America’s Bouboulina” named after a heroine of the Hellenic Revolution, for her fierce championship of Hellenic and American values. She is the Co-Founder and Co-Chair of the Hellenic Congressional Caucus; Chair, Oversight and Government Reform Committee; Lead House Sponsor of the Equal Rights Amendment (E.R.A.) and Author of the Smithsonian Women’s History Museum Act, which was recently signed into law in celebration of Women’s History Month. We’re celebrating American Philhellenic Women for their generous outpouring of love and support for the independence of Greece, and their lasting impact on the Women’s Suffrage/Women’s Rights Movement.

Lou Katsos EMBCA's President/ Founder and Chairman of AHEPA's Hellenic Cultural Commission will Introduce the panel discussion which will be moderated by EMBCA’s Executive Vice President, Marina A. Belessis Casoria, with the distinguished panel, (in formation) that will include, Professor Maureen Santelli, of NVCC, Author of “The Greek Fire: American-Ottoman Relations and Democratic Fervor in the Age of Revolutions” and Professor Angelo Repousis, of Villanova University, Author of “Greek-American Relations from Monroe to Truman.”

The American Philhellenic Movement sparked outrage for the enslavement of Christian Hellenes, particularly Hellenic women, leading to an outcry of public support not only for the Greek Cause, but causes of anti-slavery, abolition and women’s rights in American democracy. The philhellenic movement’s popular political rhetoric was adopted by women for public awakening, political awareness and engagement on women’s rights to property, wages, voting and the overall status of women. “Upon seeing the statue, “The Greek Slave” evoked emotions within her, for she was struck by how emblematic of women the statue was, with its fettered hands, and half-averted face,” Lucy Stone recalled that in contemplating, the meaning of the statue “hot tears came to my eyes at the thought of millions of women who must be freed.” For Stone, the Greek Slave was an emotional and poignant reminder of the status not only of women in war torn Greece, but of women in Stone’s own country.” The Philhellenic movement helped awaken American women from “The Cult of True Womanhood” which kept them in segregated private spaces. It helped engage American women in international humanitarian relief and reform, with extended missionary benevolent interests in anti-slavery, abolition and social welfare reform. Enthusiastic public support for the Hellenic Revolution (1821-1829) nurtured support for humanitarian intervention, enlarging American interest in international affairs, and expanding women's participation in the public sphere.

The Greek Revolution was truly revolutionary, as it championed revolution from tyranny and slavery in both Greece and America. Greek Committees established in many cities and private contributions were given for the aid of the Greeks with food, clothing, and medicine. Humanitarian relief from American Philhellenic “Greek Committees” sent shiploads with desperately needed supplies. It may be safe to say that without the moral, intellectual, political, monetary and in-kind assistance of these Americans, the outcome of the Greek War for Independence might have been different. Forming grassroots social and religious groups for the Greek Cause, women through Greek Committees spread ‘The Greek Fever” or “The Greek Fire” in humanitarian activism, fundraising, philanthropy and leadership. Philhellenic political activism led them to question women’s issues, citizenship rights, freedoms and public role in the world, seeking to become active stakeholders in the American political franchise. American women devoted themselves to the aid of Greek women and children, articulating that Ancient Greek democracy could be revived if the Greeks defeated the despotic Ottoman Empire. American women’s love of Classical Greece inspired them to act heroically to help Greece win freedom from Ottoman slavery. American Classicism and Philhellenism led to women’s public and civic activism.

It’s a fascinating story of a catalytic transformation in women’s rights due in part to Philhellenic American women’s active participation in the Hellenic Revolution. This groundbreaking event will help develop a greater understanding of both the Philhellenic movement and the Women’s Rights movement, during the concurrent celebrations of the Hellenic Revolution BiCentennial and the Women’s Suffrage Centennial. Julia Ward Howe, for example was an advocate for abolitionism and for Women’s Suffrage. She later wrote The Battle Hymn of the Republic and the 1870 Pacifist Mother’s Day Proclamation, which initiated the Mother’s Day holiday. Emma Willard, a philhellenic heroine, is overlooked as a feminist activist pioneer in the women’s rights/women’s suffrage movement. She should be better recognized for planting early seeds of the women’s movement. Her many contributions were reaped by the next generations such as by her student, Elizabeth Cady Stanton, who attended the Troy Seminary for Female Education. Emma Willard, in her dedication to female education, politically lobbied government to secure funding for women’s education, nurtured women’s networks, provided knowledge and skills that uplifted generations of American women, and Greek women, with educational infrastructure in Greece. The Troy Society for the Advancement of Female Education in Greece, began the first women’s school on the Acropolis in Athens. Emma Hart Willard's use of philhellenic rhetoric describing her “Greek Sisters” as slaves to be freed, shows her to be an early women’s rights activist, feminist and leading player in the political life of women, although she declined to be publicly affiliated with politics of Women’s Suffrage. In her private correspondence, she expressed well developed political views, calling for women’s active participation in public governance.

The image for the panel discussion shows (on top) Susan B. Anthony facing Elizabeth Candy Stanton, and Julia Ward Howe facing Lucy Stone (on the bottom). They were all former Philhellenic friends, abolitionists and major figures as the women’s suffrage movement. In 1869, they splintered into two groups with Elizabeth Cady Stanton and Susan B. Anthony forming the National Woman Suffrage Association, with a focus on pressing for a federal amendment enfranchising women while Julia Ward Howe, Lucy Stone, and Henry Blackwell formed the competing American Woman Suffrage Association, which advocated state-by-state enfranchisement of women and avoided the National’s efforts to link women’s suffrage to trade unionism, divorce reform, and other issues. After the Civil War, debate over the 14th and 15th Amendments to the Constitution— which would grant citizenship and suffrage to African-American men—inspired many women’s rights activists to refocus their efforts on the battle for female suffrage. Elizabeth Cady Stanton and Susan B. Anthony, campaigned against any suffrage amendment that would exclude women, while some of their former allies—including Lucy Stone, Antoinette Brown Blackwell, Julia Ward Howe and Frederick Douglass—argued that this was “the Negro’s hour” and female suffrage could wait. The split between the two sides endured until 1890, when the two organizations merged to form the National American Women’s Suffrage Association. These and many other philhellenic women’s rights leaders and advocates mentioned above will be discussed during this panel discussion.

This event and others we have had, and are being planned are part of EMBCA’s American Hellenic Revolution of 1821 Bicentennial Committee series of events focusing not only on the Hellenic Revolution but also importantly on the American, Diaspora and International aspects and influences of the Revolution for its 200 Year Anniversary.

Register for Event: “The Hellenic Revolution and its Effects on the American Women’s Suffrage Movement” Panel Discussion

Your ticket for the: “The Hellenic Revolution and its Effects on the American Women’s Suffrage Movement” Panel Discussion