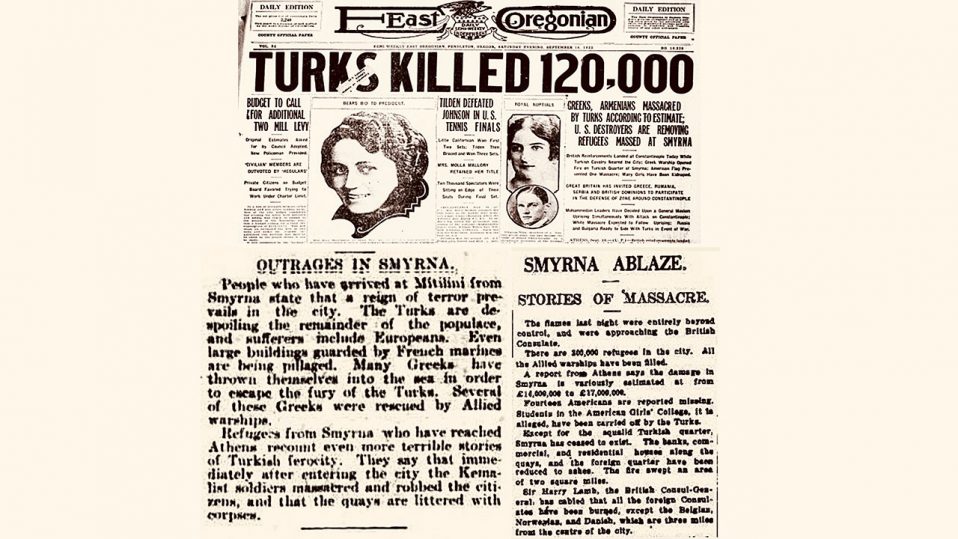 Join us for EMBCA’s “Never Forget: The Burning of Smyrna and the 30 Year (1894- 1924) Systemic Hellenic/ Christian Genocide” Zoom Webinar on Sunday, September 12 at 2 P.M./ 9 P.M. Athens EEST in Association with AHEPA’s Hellenic Cultural Commission. The event will be introduced and moderated by Lou Katsos, EMBCA's President/Founder and Chairman of AHEPA’s Hellenic Cultural Commission. The distinguished panel will include Professor Ismini Lamb the Director of The Modern Greek Program in the Department of Classics at Georgetown University , Genocide Scholar Dr. Panayiotis Diamadis , Author/ Engineer Savvas "Sam" Koktzoglou, and Peter Stavrianidis, PHD Educator/Community Leader in Hellenic Genocide Issues.

This year is the 99th Anniversary of the Burning of Smyrna, and part of the final chapter in what has been described in authors Benny Morris and Dror Ze'evi book as "The Thirty-Year Genocide: Turkey's Destruction of Its Christian Minorities 1894- 1924". Although we have various dates of remembrance for the various aspects of the systemic Christian genocide, Hellenic (Thracian, Pontian, Asia Minor), Armenian, and Assyrian, by the Otoman Turks it is important to note that the genocide in many ways should be understood as a single event that targeted ALL the Christian minorities in the late Ottoman period. Millions were targeted and systematically murdered during the period and it is shocking that some nations have not recognized the first major genocide of the 20th Century to this day. Although Christians represented 20% of the population and not disputed, in what later became the Turkish Republic (1923), in 1894 only tens of thousands remained in 1924. We hope this panel discussion and conversation contributes to a continuing wave of research, discussions, activism , justice, and results in terms of recognition on this very important topic of historic systemic genocide. May the memories of those that perished and those subjected to inhuman cruelties be eternal, and never forgotten.

The Burning of Smyrna/Smyrna Catastrophe (in the Hellenic – Καταστροφή της Σμύρνης) refers to the deliberately set fire four days after Turkish forces entered and captured the port city of cosmopolitan Smyrna in Asia Minor and which completely destroyed its Hellenic and Armenian quarters. Its Muslim quarters escaped damage. The fire was started September 13 and extinguished September 22 in 1922. Turkish troops per eyewitnesses systematically cordoned off the Quay to contain the Hellenes and Armenians within their fire zone quarters and prevented them from fleeing. The estimated Hellenic and Armenian deaths resulting from the fire range up to 100,000 and approximately up to 400,000 Hellenic and Armenian refugees in the city from other parts of Asia Minor to escape the Turkish Troops and irregulars cramming its waterfront and quays to escape from the horrific flames. Eyewitness reports describe panic-stricken civilian refugees diving into the water to escape the flames and that their terrified screaming could be heard miles away. They were forced to remain there under harsh conditions and were periodically robbed for two weeks and after having had massacres and atrocities committed on them before the outbreak of the fire. Women were raped and tens of thousands of Hellenic and Armenian men were subsequently deported into the interior of Anatolia, where many died in harsh and brutal conditions. After the Smyrna Catastrophe the Hellenic city founded over 3,000 years before , a jewel of the Eastern Mediterranean, ceased to have Hellenic residents.

Prof. Ismini Lamb-
Ismini Lamb is the Director of the Modern Greek Studies Program at Georgetown University where she teaches all levels of Modern Greek language and a wide range of interdisciplinary courses on Greek culture, including courses on Media ; Film, Byzantine History ; Civilization, The Orthodox Faith and Greek Business Culture. She is also a C.S. Lewis fellow. Her research interests include the influence of political ethos and media on Greek national identity and expression, Modern Greek reception studies, national and ecumenical Hellenism and social and humanitarian issues in contemporary Greece. Currently she is writing a biography of the American philhellene, classicist, author, diplomat, ethnographer, and humanitarian activist, George Horton.

Dr. Panayiotis Diamadis -
Dr Panayiotis Diamadis was born and raised in Sydney Australia to migrants from Ioannina and Agrinio on mainland Hellas. Educated at The University of Sydney from which he graduated with a PhD in Genocide Studies, his research focusses on the Australian Hellenic relationship, particularly around the period of the Genocide of the Hellenes 1914-1924. Dr Diamadis has been an active member of the Australian Hellenic community for 33 years, starting out in a folkloric dance group. He has participated in SAE Oceania and International Conferences and served for many years on the Australian Hellenic Council. Panayioti has been an Ahepan since 1991, and from 2013 has been the Secretary of the Order of AHEPA New South Wales Inc. He will be speaking about the role of Americans in inspiring the humanitarian relief effort on behalf of the survivors. The title of his presentation is "True leadership: American and Australian relief efforts for survivors of the Genocides".

Savvas "Sam" Koktzoglou -
Savvas "Sam" Koktzzoglou is the Co- Author of the acclaimed book The Greek Genocide in American Naval War Diaries - Naval Commanders Report and Protest Death Marches and Massacres in Turkey's Pontus Region, 1921-1922. He is a retired mechanical engineer. He received his engineering degrees from Villanova University and the University of Pennsylvania and has worked in senior level engineering positions in both the private and government sectors in the United States and internationally. He has been active in various capacities in a number of Chicago area nonprofit organizations. Prior to his engineering career, he served as a second lieutenant in the special forces of the Greek Army reserves. The subject of his brief talk will be the book “ The Greek Genocide in American Naval War Diaries” which he co-authored with the late Dr. Robert Shenk and which was published in 1920 by the University of New Orleans.

Dr. Peter Stavrianidis-
Dr. Stavrianidis , a successful entrepreneur, has been active in the Hellenic-American Community and has held numerous leadership posts with organizations connected with Hellenic Issues of the Diaspora and the Genocide of Asia Minor. As a passionate political activist and lobbyist for Hellenic and Pontian Issues and was instrumental in the unanimously passing of the Resolution of the State Legislature of NJ, in 2006, urging Turkey to respect the rights and religious freedoms of the Ecumenical Patriarchate. He is the Past President of the Pan-Pontian Federation of US & Canada and in his tenure the first state proclamations in 2002 (NY & NJ) – regarding the Asian Minor/ Pontian Genocide took place. He is currently the President of the scientific and cultural organization “The Hellenic Link of New Jersey” and he sits on the Board of Trustees of the State Theatre of New Jersey and the Harvest of Hope. Peter has a passion for education teaching occasionally and as an adjunct professor taught at the Fashion Institute of Technology (SUNY), and currently conducting research on the history of the Greek Jews in conjunction with the Panteion University of Greece. He is an Archon of the Order of Saint Andrew the Apostle and on the Education Committee of the Metropolis of New Jersey.

Your ticket for the: “Never Forget: The Burning of Smyrna and the 30 Year (1894- 1924) Systemic Hellenic/ Christian Genocide” Panel Discussion