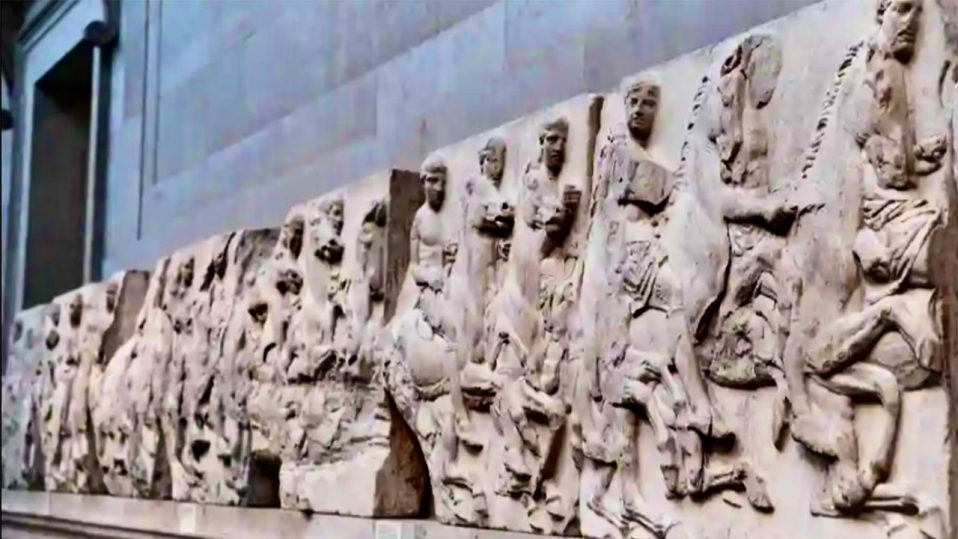 Join us this for EMBCA’s “The “Elgin”/Parthenon Sculptures Controversy” Panel Discussion on Sunday, May 22 at 2 P.M. EST/ 9 P.M. Athens EEST. The event will be in Association with AHEPA’s Hellenic Cultural Commission. Lou Katsos EMBCA’s President /Founder and AHEPA’s National Cultural Commission Chairman will Introduce and Moderate the event. The distinguished panel will include Professor Othon Anastasakis the Director of South East European Studies at Oxford (SEESOX); Author/Poet Nicholas Alexiou, Professor of Sociology and Director of the Hellenic American Project at Queens College; Architect/Lecturer/Artist John Fotiadis; and DeeGee Lester the Founder/President of the U.S. branch of the Hellenic Institute of Cultural Diplomacy and former Director of Education of the Parthenon on Nashville, Tennessee. You can access the live panel discussion through the YouTube link below.

There has been an ongoing controversy of over 220 years relating to Lord Elgin’s removal, starting in 1801, of sculptures from the Parthenon and its surrounding structures including pieces from the Erechtheion, the Propylaia, and the Temple of Athena Nike, all inside the Acropolis. This includes the legality of their removal from Athens, the reaction during that period including the strong objection from Lord Byron who denounced Elgin as a vandal. Join us as we discuss the background , the acquisition, the hotly contested legality, and the rational of debate for and against the Parthenon / Acropolis sculptures return, as well as issues transcending right or wrong, and perhaps areas and research not frequently discussed on the topic.

The British government has agreed this past week to talks on the repatriation of the ancient Elgin Marbles which could see the artefacts brought back to Hellas and campaigners for the Marbles' return have shared their delight of this latest update. Still talking and returning are two different things as the English Department for Digital Culture, Media and Sport leading the talks with the Hellenic Republic , have said that the UK's long-standing position on the issue 'has not changed' while the British Museum stated that they would not be taking part in these Unesco-backed talks.

EMBCA does not agree with the Hellenic PM proposal in November that the sculptures could be “loaned” by the British Museum in an artefact exchange but that rather they should be “returned”.

This National Herald/Ethnikos Kirix Weekend magazine (May 14/15) was dedicated to the return of the Parthenon/Acropolis Marbles and had excellent articles by various scholars on the topic. In EMBCA’s full page ad that appeared there we equated the Acropolis Marbles as metaphorical slaves from the Ottoman period which were given their master’s name “Elgin” and boarded on ships over a ten year period (1802- 1812) and that they have been in captivity in London in a foreign land, enslaved among strangers and wanting/ demanding to be returned to the land of their creation and cultural heritage - Hellas.

Our metaphor related to The Greek Slave sculpture (sculpted in 1844) a very famous sculpture by the American sculptor Hiram Powers. It is one of the best-known and critically acclaimed American artworks of the nineteenth century which affected the American Abolitionist Movement, and is among the most popular American sculptures ever. We brought up The Greek Slave statue and its influence in a couple of EMBCA panel discussions relating to the Greek Revolution and its affects on the American Abolitionist movement.

“The Slave has been taken from one of the Greek Islands by the Turks, in the time of the Greek revolution, the history of which is familiar to all. Her father and mother, and perhaps all her kindred, have been destroyed by her foes, and she alone preserved as a treasure too valuable to be thrown away. She is now among barbarian strangers, under the pressure of a full recollection of the calamitous events which have brought her to her present state; and she stands exposed to the gaze of the people she abhors, and awaits her fate with intense anxiety, tempered indeed by the support of her reliance upon the goodness of God…”

The return of the Acropolis sculptures is also one of the themes of this year’s Greek Independence Day Parade 2022 in New York on Sunday, June 5th. down 5th Avenue and which is the largest Hellenic Independence Day parade in the world.

Your ticket for the: “The “Elgin”/Parthenon Sculptures Controversy” Panel Discussion