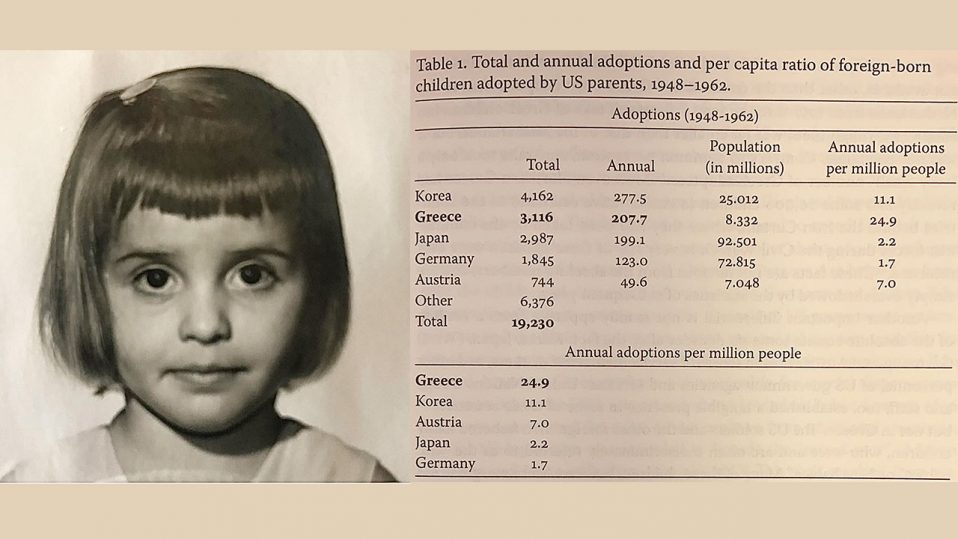 Join us for EMBCA’s “Unfinished Business: Postwar Greek Adoption History and Current Adoptee Activism” Panel Discussion Webinar on Sunday, September 26 at 2 P.M. EST/9 P.M. EEST Athens. The event will be introduced and moderated by Lou Katsos, EMBCA's President /Founder. The distinguished panel will include Professor Gonda Van Steen the Koraes Chair in the Centre for Hellenic Studies and the Department of Classics at King's College, Professor Mary Cardaras Chair of the Department of Communication at California State University, East Bay, and Lawyer Vasilis Sotiropoulos at the Supreme Court (Court of Cessation) in the Hellenic Republic.

The etymology of the word orphan is Hellenic from the word ὀρφανός (romanized- orphanos) and is a child whose parent(s) have died, are unknown or have permanently abandoned them. The causes for orphans are many - wars, genocide, economic problems, cultural stigmas, social chaos, natural disasters, and plagues, and was used to describe children who lose their father before puberty, and with other definitions over time. In this panel discussion, and a follow up due to popular demand from EMBCA's “Hellenic Orphans Taken Abroad from 1821 through the 1960’s” Panel Discussion (watch here) in January the topic of Hellenic orphans (and many not so) brought over to America and other nations during the Cold War period in the 1950's and 60's will be discussed in depth. This will include the history of postwar Hellenic adoptions as well as the current activism activities around this very important area of concern including the issue of restoring Hellenic citizenship to Hellenic adoptees. Among the questions are : What became of the Greek adoptees of the 1950s and 1960s? How do they interpret their own adoption stories? What venues do they seek out to make their voices heard? What remains to be done for them? What is the meaning of the Greek adoptee movement in the broader picture of Hellenic American and transnational relations? We hope this panel discussion and conversation contributes to a continuing wave of research, discussions and results on this very important topic of post war adoptee "unfinished business".

Gonda Van Steen holds the Koraes Chair in the Centre for Hellenic Studies and the Department of Classics at King’s College London. She is the author of five books: Venom in Verse: Aristophanes in Modern Greece (2000); Liberating Hellenism from the Ottoman Empire (2010); Theatre of the Condemned: Classical Tragedy on Greek Prison Islands (2011); and Stage of Emergency: Theater and Public Performance under the Greek Military Dictatorship of 1967-1974 (2015). Her latest book, Adoption, Memory, and Cold War Greece: Kid pro quo? (University of Michigan Press, 2019), takes the reader into the new, uncharted terrain of Greek adoption stories that become paradigmatic of Cold War politics and history. This book is coming out in Greek translation in October 2021, with Ekdoseis Potamos. Professor Gonda Van Steen, will briefly outline the postwar, but essentially Cold War Greek adoption history, and assess the numbers of Greek-born children sent to the USA and to the Netherlands. Her talk is entitled “The Postwar Greek Adoption History: Why an Unfinished Business?” and will briefly outline the historical evolution of the Greek adoption movement and the vulnerabilities and loose ends it left behind for the more than 3,000 Greek-born children affected.

Mary Cardaras, was adopted from Greece to the USA in the 1950s. She holds a Ph.D. in Public and International Affairs and is an Associate Professor and Chair of the Department of Communication where she teaches Political Communication, Journalism and Documentary Filmat California State University, East Bay. She is an EMMY award winning documentary film producer who is currently working on a number of short films about the effects of the environment on public health. She has written a novella, Ripped at the Root: An Adoption Story, to be published by Spuytin Duyvil late this year. As an adoptee, Cardaras is compiling an anthology of Greek adoptee stories. This is a pioneering initiative, given that no previous Greek collection exists in English. Mary has thirteen essayists on board for the collection, Voices of the Lost Children of Greece: Oral Histories of Post-War International Adoption, 1948-1968. Their stories, including her own, will strike home the experience of international adoption, whose impact is lifelong, but is not properly measured, let alone acknowledged. Professor Cardaras will explain her own journey as an adoptee and what the embrace of her country, Greece, means to her and the others who hope that their citizenship be restored. Her talk is entitled “The Lifelong Repercussions of Being an Adoptee.” She will provide insight to the lifelong consequences of being an adoptee. Her adoption, and the stigma attached to it, has impacted every aspect of her life, and, indeed, has characterized her life. She will explain how the same is true for all the other Greek-born adoptees, who are writing essays for her forthcoming book Voices of the Lost Children of Greece. She will discuss the feelings of abandonment, in particular, which can be eased with reparations in the form of welcoming Greek-born adoptees back home to Greece and by restoring citizenship, stripped from them as children and infants, and also by making it easier to obtain birth and adoption records.

Vasilis Sotiropoulos was born in Athens in 1978. He is a lawyer at the Supreme Court (Court of Cassation) of Greece and holds a Master’s Degree in Public Law. In 2005 he founded the first Greek legal blog, e-lawyer, in an attempt to generate debate on the protection of personal data and respect for civil liberties on the Internet. He is always looking for ideas for institutional innovations that bring people closer to their constitutional freedoms. With that in mind, he was the first elected Ombudsman of the City of Athens in 2012. Alongside a group of co-workersthey created this structure from scratch in Athens for the prompt resolution of disputes between the citizens and the City of Athens. Having next been elected Ombudsman of the Region of Attica, his mission has been to strengthen the relations between citizens and public services and to achieve the resolution of disputes between them, acting as a mediator, without having to go to court. Vasilis Sotiropoulos talk is entitled “Current Action to Restore Greek Citizenship to Greek-born Adoptees”. Vasilis Sotiropoulos will speak about the efforts made to have the Greek citizenship of the Greek-born adoptees recognized. He will explain how his current activism builds on other challenges that have been posed to any narrow definition of Greek citizenship.