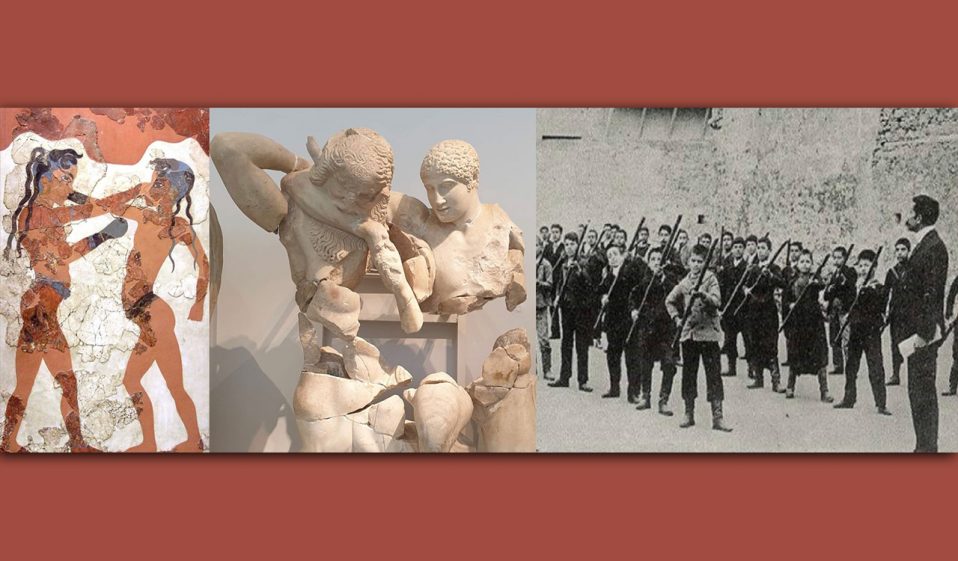 Martial Arts and Combat Sports in Greece have a long and documented history, going back to the Minoan era circa 1900 BC and reaching all the way into the modern age. Long before the celebrated Samurai of Japan even existed, the warriors of ancient Hellas achieved legendary status on the battlefield. Over the millennia martial arts in Greece evolved, their historical course following the development of military strategy and the necessary responses new weapons dictated for hand-to-hand fighting and melee combat. More than just a means of close quarter combat, Hellenic martial arts were also a means of strengthening character and fortifying the mind, body and spirit. The panel will discuss the history and evolution of martial arts and combat sports in ancient and modern Greece, how they may be practiced today to allow the practitioner to thrive in the turmoil of the modern world, and how they may be propagated as a cultural artifact for the empowerment of Hellenic society around the world today.

Kostas Dervenis-
Kostas Dervenis has studied martial arts for more than 50 years. Throughout his life, he has trained in karate, judo, jujutsu, ninpo taijutsu, kung fu, and tai chi chuan, as well as western boxing and fencing, retaining high ranks in traditional Japanese jujutsu and bujutsu. A renown author and researcher of martial arts and their history, his work was referenced by Bettany Hughes in her book, "Helen of Troy," and he was cited as an expert on Bronze Age combat in the accompanying Channel 4 documentary. Kostas’ book "The Martial Arts of Ancient Greece" has been included as a reference for the degree program at the US Army War College. He is a consistent collaborator of the Hellenic Armed Forces and the NATO Maritime Interdiction Operational Training Center in Crete; his paper "The Neurophysiological and Evolutionary Considerations of Close Combat: A modular approach," which was derived from his work with the Hellenic military, received an honorary distinction at the 4th International Medical Olympiad. Kostas is the current Headmaster of the traditional Hellenic martial education system of Pammachon. Professionally he is an engineer, having served in the past as the Engineering Manager of the original Greek F-16 program, and currently working as a Senior Sales Manager in the software industry in Brussels, Belgium.

Eric Hill-
Eric has 35 years of experience in the warrior arts. Over that time frame he has appeared in various outlets of significance to the martial genre. Via a series of synchronous events, which are ongoing, Eric began a collaboration with Kostas Dervenis in 2014 where he adopted Kostas' scientific & cultural platform of Πάμμαχον. He is the volunteer director of the US Hellenic Combatives program for youth of the US Hellenic Community.

Eric engineered the Hellenic Combatives kits over a series of trials. They have been adopted in nearly all aspects of the US program as they were found to accelerate skills acquisition for all age groups.

Katherine Loukopoulos-
Katherine started practicing karate 50 years ago in New York City. She was a member of USA National Karate Team for seven years. Her achievements include 10 times ‘All American’, three times ‘All around All American’, Pan American Championships and a World Games title, (1979 – 1985). She moved to Okinawa for 15 years in order to study in depth the martial arts, and is one of the foremost Western scholars of same. She wrote and developed Standing Operating Procedures for the US Marine Corps Martial Arts Programs in the Pacific., and was inducted into the USA Martial Arts Hall of Fame in 1985 and 2019.

Petros Tsirigotis-
Petros Tsirigotis has been training in the martial arts for over 40 years and in over a dozen martial arts from around the globe. He was a member of the 2002 U.S. Boxe Francais Team, a former Vice President of the U.S. Savate Federation, a former Vice President of the Washington Wrestling Club, and author of “Developing Body, Mind, and Spirit – A Parents Guide to Martial Arts Training for Kids.” Prior to our current pandemic, Peter taught a kids martial arts program based on Pammachon at the Hellenic Center in the metropolitan DC area. He is a shareholder at an International Law firm, where he practices corporate law.

Dimitris Horiates-
Dimitris Horiatis started practicing the Martial Arts when he was 14 years old. He has studies several systems including Taekwondo, Muay Thai, BJJ, Greco-Roman Wrestling, Western Boxing, MMA and has earned a red sash in Wing Chun. He taught Kung Fu to ROTC students during his college years at US Santa Barbara and has served in the Hellenic Special Forces. He is currently working as a senior manager in international business development and foreign direct investment in New York City.

Register for Event: ”Warrior Arts of the Hellenes : From Ancient Times to the Modern Era” Panel Discussion Zoom Webinar

Your ticket for the: ”Warrior Arts of the Hellenes : From Ancient Times to the Modern Era” Panel Discussion Zoom Webinar