EMBCA > Events > ARTICLE: Congresswoman Carolyn B. Maloney submitting her remarks for the Congressional Record on December 13 for EMBCA’s Hellenic/Philhellenic Women and Their Effect on the Hellenic Revolution.

ARTICLE: Congresswoman Carolyn B. Maloney submitting her remarks for the Congressional Record on December 13 for EMBCA’s Hellenic/Philhellenic Women and Their Effect on the Hellenic Revolution. 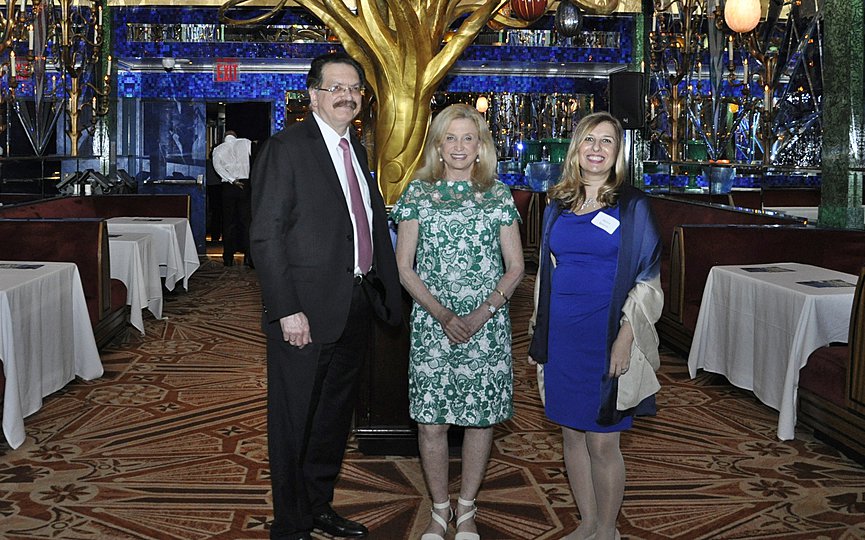 WASHINGTON, DC – Congresswoman Carolyn B. Maloney participated in the East Mediterranean Business Culture Alliance (EMBCA) event Hellenic/Philhellenic Women and Their Effect on the Hellenic Revolution and submitted her remarks for the Congressional Record on December 13. She presented the framed copy of the Congressional Record at the EMBCA event, virtually.

Part of a series of events celebrating the bicentennial of the start of the Greek War of Independence, the event and Maloney’s words highlight the contribution of many unsung heroes, women and philhellenes, who fought for freedom even before the Revolution and later continued the struggle in the Abolition and Women’s Suffrage movements. Maloney, co-chair and co-founder of the Congressional Caucus on Hellenic Issues, also highlights the longstanding relationship between the United States and Greece.

The online event may be viewed on EMBCA’s YouTube channel: https://youtu.be/uUpp1EjYC68.

As co-chair and co-founder of the Congressional Caucus on Hellenic Issues, I rise today to honor the heroic Hellenic and American Philhellenic women of the Greek War of Independence, whose consequential actions helped free Greece and her people from the yoke of the Ottoman Empire.

As a member of the East Mediterranean Business Culture Alliance’s American Hellenic Revolution Bicentennial Celebration Committee, and as we approach the 200th anniversary of the Greek War of Independence, it is incumbent upon all of us to honor the legacy of these women and recognize how their actions influenced the relationship between the United States and Greece.

I have the unique privilege of representing one of the largest Greek American communities in the U.S. in Astoria, Queens, and I am blessed to call many of them close friends.

I’m especially honored that my friends in the Hellenic community have bestowed me with the nickname “Bouboulina” after Laskarina Bouboulina, one of the many great warriors of the Greek War of Independence and whose home I had the privilege of visiting in 2016.

Bouboulina was a trailblazer in her own right and committed herself to the cause of a free and independent Greek state.

And I rise not only to honor these brave women, but also recognize the Greek people’s contributions to democracy, art, science, and literature, and to governments around the world, including our own.

As the birthplace of democracy, Greece was an inspiration for the U.S. system of government. And just as Greece inspired our country, our revolution helped inspire the Greeks to revolt against the Ottomans.

When the Greek War of Independence started, American Philhellenes and Greek American communities in the U.S. not only voiced their support for the cause, but actively supported their campaign.

Greek Committees were formed in cities across the country to organize political and monetary support and send shiploads of humanitarian supplies to Greek revolutionaries. It may be safe to say that without the moral, intellectual, political, monetary and in-kind assistance of these Americans, the outcome of the Greek War for Independence might have been different.

The ideals of freedom and democracy resonated for Americans who saw the plight of the Greeks suffering brutal slavery and massacres under the Ottoman Turkish oppressors. When the bells of the Revolution rang in 1821 and the cry "Freedom or Death" rang over the enslaved Greeks, American Philhellenes inspired a lobbying campaign in the United States for support of the Greek War of Independence, exciting the imaginations of many influential political and civil leaders in America.

For the deeds of heroism and valor displayed at Missolonghi during the four years of siege by the Ottoman Empire from 1822 to 1826, the city has become the "shrine" of the Greek War of Independence. All nations whose Philhellenes aided Greece in its cause have monuments in the Garden of Heroes in memory of those who died in the Greek War of Independence. These monuments include a memorial erected by the Order of Sons of Pericles, the Junior Order of AHEPA in 1939, placed there by Congressional Resolution in memory of the American Philhellenes, which reads:

“As a tribute to and in commemoration of those patriotic Americans who, aided by the moral and material support and assistance of the entire American people, gave their services, their fortunes, and their lives to the cause of Greek Independence in the Greek Revolutionary War of 1821.”

Most notably, many of these American Philhellenes included future leaders of the Women’s Suffrage and Abolitionist movements.

As American women became involved in the effort, they connected the battle against Greek slavery under the Ottoman Empire with other female-led reform movements and over time their participation grew into an international movement, expanding female participation in the public sphere for both American and Greek women.

Among the Philhellenes was Samuel Gridley Howe, an American physician and prominent Abolitionist, a member of the Secret Six, and an advocate of education, and education for the blind. He took up the Greek cause after earning a medical degree by joining the Greek army as Chief Surgeon of the Hellenic Navy and Commander during the Greek War of Independence.

Howe was married to fellow Philhellene Julia Rush Ward Howe, an Abolitionist and early leader in the Women’s Suffrage movement. She’s known as the composer of the lyrics of the “Battle Hymn of the Republic” which became an anthem during the Civil War for Abolitionists, the anti- slavery movement, women's suffrage activists, and was quoted by Dr. Martin Luther King, Jr. throughout the civil rights movement.

Emma Willard, who formed the Troy Society for the Advancement of Female Education in Greece, was one of the most outspoken advocates for the education of women.

Among America's prominent Abolitionists and supporters of the Underground Railroad were Sarah Arms Miller and her husband, Colonel Johnathan P. Miller, who fought in the Greek War of Independence. He adopted a Hellenic orphan of the revolution, Lucas Miltiades Miller, who later became the first Greek American to serve in the U.S. Congress. Many children orphaned during the Greek War of Independence became adoptees and were brought to America, ultimately becoming prominent American citizens, scholars, and members of the armed services.

And James Williams, an African American slave from Baltimore, joined the Greek revolutionaries and fought for Greece’s freedom during the Battle of Navarino and was buried there in honor of his efforts.

Trailblazers like Bouboulina, Willard, and Miller – who toppled their oppressors, demanded equality, and fought to enact change to benefit future generations of women – inspire my work in Congress every day.

The example set by Hellenic and American Philhellenic women during the Greek War of Independence exemplifies the U.S-Greece relationship that thrives to this day. It is because of our historic friendship, and shared commitment to liberal democratic values, that the U.S. and Greece continue to work on so many issues that have a profound effect on the world.

After generations of oppression, Greece’s freedom was hard-fought, and the Republic of Greece has become a shining example of democracy to the world. Greece and the Greek people are such critical allies and dear friends of the United States and I’m very proud to rise today in honor of the brave Hellenic and American Philhellenic women who played a pivotal role in securing the independence that Greece and her people celebrate to this day.

Your ticket for the: ARTICLE: Congresswoman Carolyn B. Maloney submitting her remarks for the Congressional Record on December 13 for EMBCA’s Hellenic/Philhellenic Women and Their Effect on the Hellenic Revolution.

ARTICLE: Congresswoman Carolyn B. Maloney submitting her remarks for the Congressional Record on December 13 for EMBCA’s Hellenic/Philhellenic Women and Their Effect on the Hellenic Revolution.