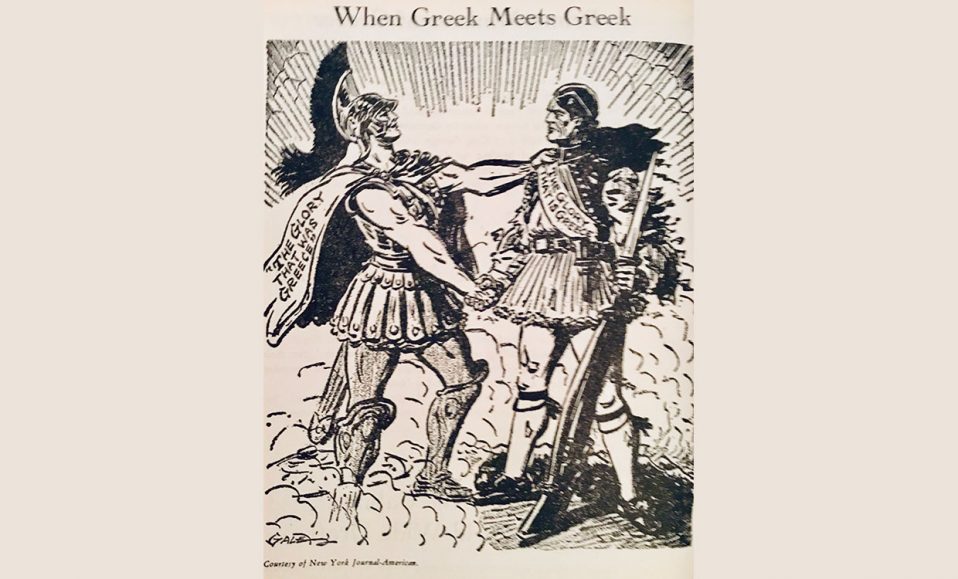 Join us on Monday, October 28 for EMBCA’s “ OXI Day (October, 28, 1940) : The Turning Point of WW2, on the 80th Anniversary of the Start of the War “ at the 3 West Club (3 West 51st ) at 6 P.M.. It will be a Demetrios Contos Memorial Lecture in Celebration of OXI Day. This lecture will include presentations by Louis Katsos EMBCA’s President on “OXI Day Before & After and its Relevance in the 21 st Century”, Vassilios Chrissochos AHEPA District 6 (N.Y.) Director Culture & Art on “OXI Day: The Cultural Impact on Hellas and the World”, and Professor Alexander Kitroeff of Haverford College on “Hellas’ OXI Day & its Impact on America. We will also have a brief musical presentation by well known Hellenic American Opera Singer Bass Baritone Costas Tsourakis singing a cappella a couple of Sofia Vembo songs of the period. The event is being sponsored by EMBCA for the Demetrios Contos Memorial Lecture Series in Celebration of OXI Day, AHEPA District 6 (NY), and AHEPA’s Hellenic Cultural Commission/ Seraphim Canoutas Lecture Series. There is NO CHARGE for this special community event but Registration is Required.

OXI Day (October 28, 1940) a national Hellenic holiday represents when the Hellenic Prime Minister Metaxas was awoken to respond to a series of demands from a representative of a WW2 Axis Power which would have allowed foreign troops free reign in Greece a neutral nation at the time. His response to these demands a simple “OXI/NO” led to battles by the Hellenes of historical international consequences for Europe and the free world. It was the first time in the European theater that an Axis Power was defeated after them taking over country after country, raised the hopes of occupied Europe, and caused the Nazi forces which were scheduled to attack the Soviet Union (Operation Barbarossa) to divert their forces and invade Greece instead. This diversion led to a delay in the Nazi invasion of the U.S.S.R. and the Nazi’s eventual defeat there in the Soviet winter. As per the title of this event OXI Day was a turning point in WW2 and had an importance that went beyond the Hellenic Republic and war international in scope. In addition despite the ultimate Hellenic defeat, having fought long and hard , the bravery of the Hellenic people during those difficult six months also had the effect of changing how Hellenic Americans were perceived in America. It transformed them from being thought of as the “Other” to being finally excepted as Americans. These and other aspects of OXI Day will be elaborated on in the presentations. Join us.