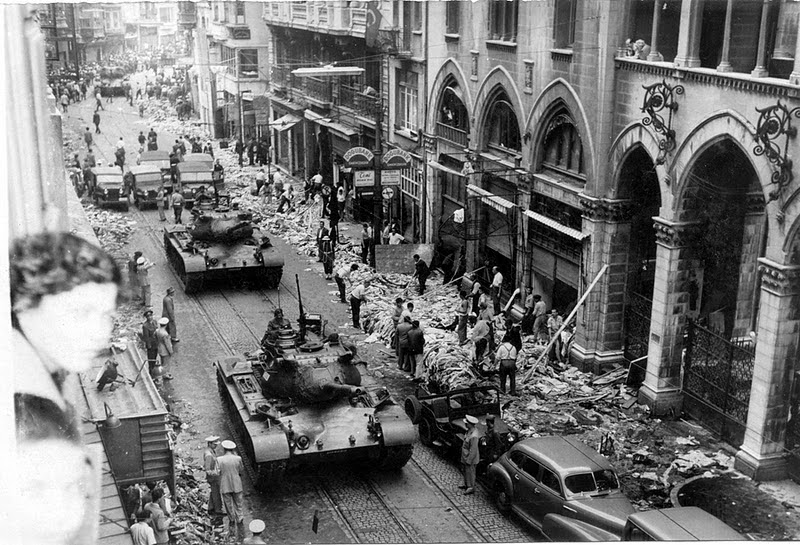 Join us on Thursday, September 6 at the 3 West Club (3 West 51 St.) at 6 P.M. for a special event on the occasion of the commemoration/remembrance of the Istanbul Progrom / Septemvriana of September 6–7, 1955. EMBCA is proud to sponsor the 2nd AHEPA Seraphim Canoutas Lecture Series event with the Order of AHEPA District 6 (New York State) & Delphi Chapter #25 (Manhattan). The commemoration will be introduced by Lou Katsos, President of EMBCA, with presentations by AHEPA District 6 Governor Demi Pamboukis and District 6 Director of Hellenism Vassilios Chrissochos. The 2nd Seraphim Canoutas Lecture will be by Prof. Alexander Kitroeff. Alexander is Associate Professor of History at Haverford College and he received his doctoral degree in Modern History from Oxford University. He specializes in the history of identity in Greece, the Greeks of the Ottoman Empire and the Greek diaspora & especially the Greek Americans. He has served as historical consultant for three historical documentaries: “The Journey: the Greek Dream in America”; “Smyrna 1922 the Destruction of a Cosmopolitan City” and “From Both Sides of the Aegean: Expulsion & Exchange of Populations Turkey-Greece 1922-24.” He has published four books: The Greeks in Egypt, 1919-1937 (London, 1989); Griegos en América, 1492-1992 (Madrid, 1992); Wrestling with the Ancients: Modern Greek Identity and the Olympics, (New York, 2004); Ελλάς, Ευρώπη Παναθηναϊκός (New York, 2010) and a collection of articles on the Jews in Greece. His latest book, The Greeks and the Making of Modern Egypt, is being published by the American University in Cairo Press and will appear in the Fall of 2018. He is currently completing a book on the history of the Greek Orthodox Archdiocese of America.

** NOTE- The Istanbul pogrom, were organized mob attacks directed primarily at Istanbul’s/Constantinople’s Hellenic minority on 6–7 September 1955. The progrom was triggered by false orchestrated news reports in the Turkish press which insinuated that Hellenes had set off a bomb the day before in the Turkish consulate in Thessaloniki, Northern Greece, and which was the former home where Mustafa Kemal Ataturk Turkey’s modern founder had been born. This was in spite of the fact that it became known that the bomb was planted by a Turkish usher at the consulate, who was later arrested and confessed. Tens of thousands making up the Turkish mobs were bused into Istanbul to carry out the attacks and Municipal and government trucks were placed in strategic points all around the city to distribute the tools of destruction (shovels, pickaxes, crowbars, ramrods and petrol), with 4,000 taxis also requisitioned to facilitate the attacks. Between 13 and 16 Hellenes (including two priests) and 1 Armenian died as a result of the pogrom and there was severe damage and costs which greatly accelerated the emigration of ethnic Hellenes from Turkey still there (their homeland for over three thousand years before that), and the Istanbul region in particular and the city founded by Hellenes in 657 B.C… The extensive damage and cost to the Hellenic population (and including some in the Armenian, Judaic and even Muslim communities of the city) included 4214 homes, 1004 businesses, 73 churches, 2 monasteries, 1 synagogue, and 26 Hellenic schools. Estimates of the economic cost of the damage varied and as high (in 1955) as $500 million USD. The Turkish government eventually paid 60 million Turkish lira of restitution (about $24 million) to those who registered their losses.

Tickets are required to attend, please click below to register.
General Admission Fee: $20
After 3pm tickets will be sold at the door.

Register for Event: The Istanbul Progrom/Septemvriana of September 6–7, 1955, a Historical Remembrance

Your ticket for the: The Istanbul Progrom/Septemvriana of September 6–7, 1955, a Historical Remembrance